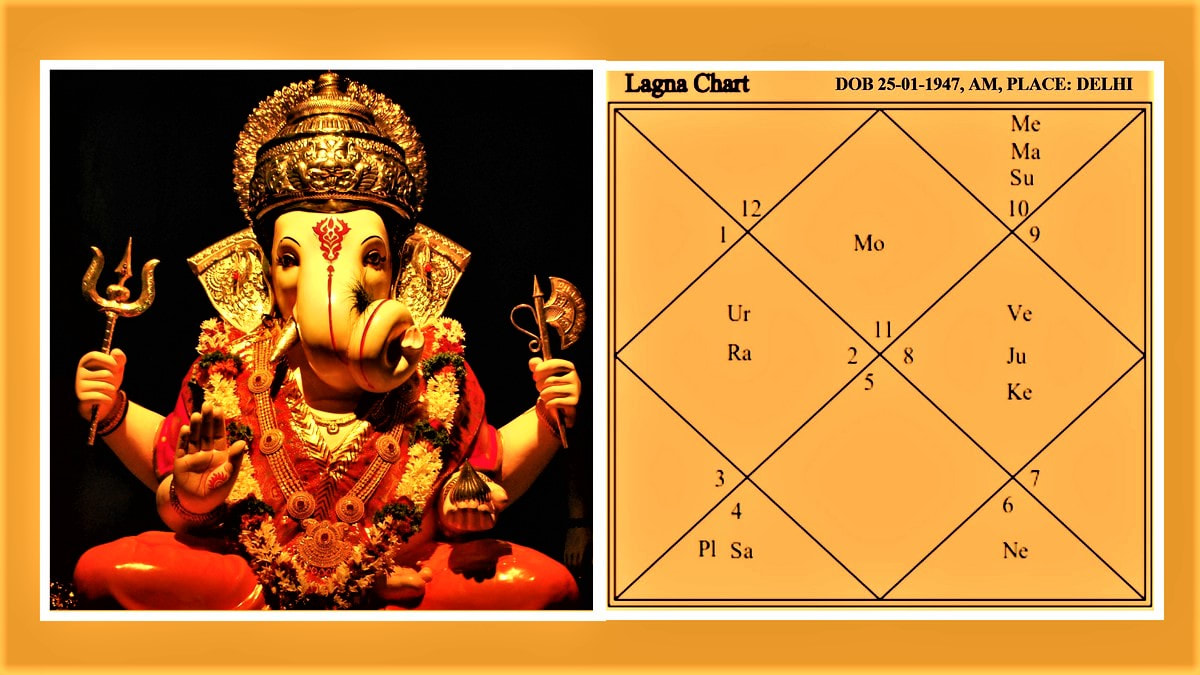 DECODING THE DESTINY
OF SWAMI SATYANANDA THROUGH VEDIC ASTROLOGY

PART (A) THE WORLDLY LIFE ​ 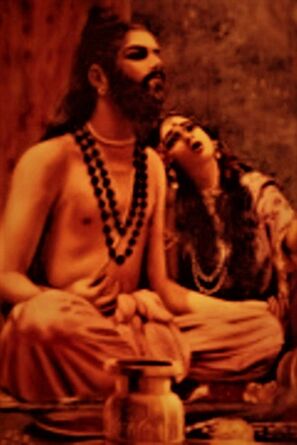 Vedic astrology or ‘ Jyotish ’ is based on the belief that a person's life is influenced by the planets and other heavenly bodies. The Kundali or the ‘ Birth Chart ’ displays the position of the planets at the time and place of a person’s birth, which is then used by the astrologer to evaluate and predict.

A person born in Aquarius Lagna is innovative, he can usher new civilizations and new thought currents. The perusal of notable horoscopes of eminent people makes it clear that Aquarius ascendants are very uncommon, and that the persons born under this sign, make their impact on the world events in a special way, whatever be their station in life, whatever be the field of operation, or whatever be the age they are born in. All Aquarius ascendants put forth a new influence on human evolution. Evidently, Prophet Mohammad, Karl Max, Abraham Lincoln, and Ramkrishna Parahamsa showed a new direction to the world.

​For the sake of brevity, only the prominent Yogas or planetary combinations in the natal horoscope, which suggest the native's worldly life are being specified as under :

​This Yoga is formed when there is an exchange between the lord of lagna and the sixth house lord. Since Saturn for the Aquarius lagna is not a malefic, therefore, it enhances the house it occupies. Moon too is a natural benefic, if it is not Asth, or if it is not conjunct with other malefics. Lagna denotes ' Self ' and 6th house ' Enemies ' due to this Yoga a person becomes an enemy of his own self or ego, which is not good for worldly life but is good to lead a holy life. Both planets are safe from inauspicious planetary influences so this parivartana yoga is not as malevolent as it appears to be.

This yoga is formed when Jupiter is in the 10th house from the moon placed in the 1st house. Gaj is Elephant and Kesari is lion, both are powerful and influential animals. Therefore, according to Rishi Parashar, if this yoga is present in a person's birth chart, he becomes capable, efficient, intellectual, proficient in creative arts, arguments and debate.

This yoga is formed when Jupiter owns the 2nd, the 5th or the 11th house from the Lagna, which is a fixed sign, and one of the lords of the 11th, the 9th or the 2nd occupies a kendra from the Moon. This yoga is a rare, highly fortunate, and a powerful Raja yoga. This yoga is known for nullifying the different adverse effects of several other bad Yogas owing to different associations and combinations of evil planets in the natal horoscope.

When benefic planets Venus ( yogkaraka and atmakarka ) alongwith Jupiter are located in 10th house from ascendant or moon Amala Yoga is formed. This is a very fortunate combination in a horoscope, it indicates good deeds in past life karma, and by virtue of it's placement in 10th house, it becomes more important, as it, signifies the performance of good karma in the present lifetime too.

Mercury is the lord of trikona, Mars and Sun are the lords of kendra, this conjunction constitutes a Raja Yoga, as well as Budaditya Yoga. Since Mars is exalted, fearlessness and self-esteem are the features that define the personality of the person having Sun, Mars and Mercury conjunction in the horoscope.

Rahu in Taurus and placed in the 4th house, behaves like a kendra planet and the benific results depends on its depositor. When Ketu is placed positively (with two benifics) in the 10th house of the horoscope it is a beneficial position.

​Beneficial results for leading a full worldly life are ascribed to the above planetary combinations.

PART (B) THE HOLY LIFE 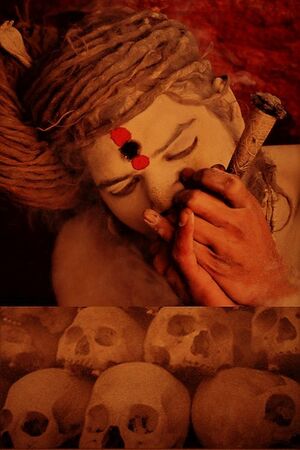 Succinctly put, the important Yogas or planetary combinations in the birth chart that suggest native's renunciation are as under :

THE IMPACT OF NAKSHATRAS : The Ascendant ( the Self ) is in Dhanishtha, Sun ( the Soul ) is in Shravana, Moon ( the mind ) is in Shatabisha, The symbol of hard work Mars is in Uttara Ashada, and the sign of Intellect Mercury is in Dhanishtha, all the five nakshatras are governed by Saturn, which means the most predominant feature of the horoscope is Dharma, which leads to the renunciation of worldly life and makes the person an ascetic.

JUPITER AND KETU : This combination makes a person highly spiritual in nature.

PARIVRAJA-YOGAS :  This is a yoga through which elevation over mental and sensual detachment happens, when the lord of the Moon sign is Saturn, and Saturn’s dispositor is aspected by, or has a sambandha with Saturn then Parivraja-yoga is formed.

TAPASAVI-YOGA : This yoga is formed when Venus, Saturn and Ketu are in mutual trikonas, and there is a conjunction of Venus with Rahu or Ketu, then it indicates that the person will not deviate and his renunciation is genuine and complete.

SATURNS ASPECT ON LAGNA : Saturn alone aspecting the lagna or its lord leads to renunciation.

Indications to become a real and not a fake ascetic are ascribed to the above planetary combinations.

This is a unique horoscope, it is configured by some very rare and noteworthy planetary combinations, suggesting that Swami Satyananda was destined to experience all the aspects of both ' Worldly and Holy Life '  fully well in his short span of life.

Considering other planetary positions, aspects, and the 12th house, the possibility of his attaining  'Moksha ' is also not ruled out.

However, the bad effects of the Parivartan yoga, which turned into an evil Dainya Yoga, due to malefic aspects, created obstacles, and prevented him, from achieving a well-deserved worldy success.

Unsung heroes like Swami Satyananda are the real building blocks of the society, which enable the  'Changemakers’ to transform the course of human destiny when the right time comes.

There are no lesser beings or higher beings, every human being makes his own individual contribution to accelarate the overall evolutionary process of mankind to a higher level.

Why after a lapse of more than 40 years Swami Satyananda's presence is being felt by his near and dear one's with extreme thankfulness ?  Why are they now talking about him and remembering him with a loving fondness by showing their sincere respect for him ?

‘ Para-astrology ' a pseudoscience based on para-waves claims the feeling of energy exists at a divine or higher level from worldly or material life that can help us with its power of curing diseases, since para-waves are cosmic energy the blessing of a spiritual person ( para-yogi ) is required for transmission.

A para-yogi explained that feeling the presence of Swami Satyananda at a time when the whole world is under lockdown due to Covid-19 pandemic suggests that the cosmic healer has come to heal us.

This is how falsehood is spread and myths are created, even if, it is scientifically disproved.

​I’m revealing the methodology the para-astrologers use to mislead people. Astrology in any form is a parascience. The astrological point of view is deliberated here intentionally, as an attempt to interpret the mystical and not to endorse beliefs and superstitions.

I would like to point out here that whenever we discuss astrology the issue of freewill also crops up.
Freewill means personal choice in the conduct of human beings, and it is not determined by the placement of planets in a horoscope.

Elements combine and form compounds, and we identify them as animate beings or inanimate things. A Human being has no free will or choice when, where and why he is born, and has no control over his ageing process from infant to old age, and hardly knows when, where and why he dies. These basic facts of human life shows that the idea of ' Freewill ' does not exist in the natural world.

If the Sun wants Sabbath, imagine what will happen.

Man has created numerous disciplines of knowledge, technology, money and cities, in these manmade arrangements, the idea of freewill exists, so here freewill can be used freely to pursue any manmade discipline of knowledge, enter any manmade profession to earn manmade money, and stay in any manmade city. It means that ‘ Freewill ’ prevails only in the manmade world.

Astrology asserts credence claiming that, it takes into consideration natural planets and its movements. But on the contrary, astrological predictions are mostly based on natural planets effecting manmade activities. Like one’s profession and who will be rich or poor, etc. This is not proper, if astrology predicts planetary consequences on human physiology and its functioning then it is acceptable not otherwise.

Now I wonder. Do planets continue to shower their grace on the person even when he is no more in the world ? Or ; Am I on purpose reviving Swami Satyananda's memoirs to keep his memories alive in the family ? Or ; Has his ethereal presence actually descended on earth to forgive his tormentors and bless the whole world ? Or ; Have I triggered old memories to run riot to befool others ?

​I do not know…but I do feel...I’m in touch with his presence… How ? This is hard for me to explain !!! Therefore, let me trace the touch of the divine, glimpsed in the realm of the ' Akashic records ' before it disappears in oblivion. - ( Kali )